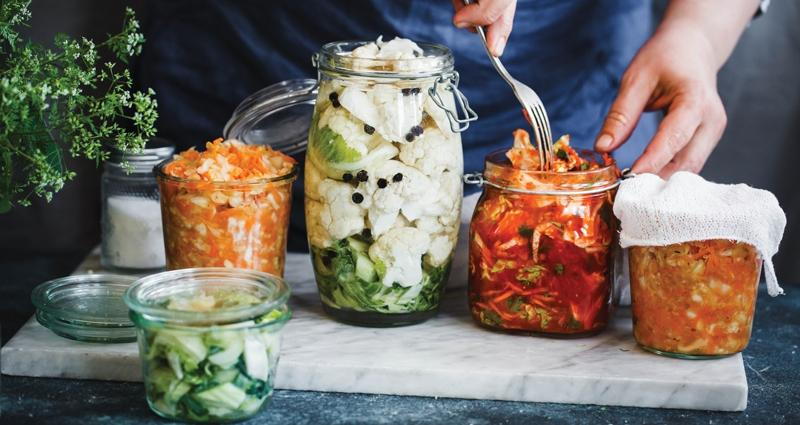 “I grew up in New York City as the grandson of immigrants from Belarus, and sauerkraut and pickles were common foods I always loved, but neither my grandparents nor anyone else I knew made them,” says Sandor Katz. This Woodbury, Tennessee writer who travels the world giving related workshops is credited with bringing fermented foods back into the limelight. He explains, “I am self-taught and learned to ferment by experimentation. It was that first successful batch of sauerkraut that sparked my obsession. I also love eating cheese, beer, chocolate, coffee, yogurt and many other products of fermentation.”

Jennifer McGruther, who lives in the Pacific Northwest, is the author of The Nourished Kitchen cookbook, an offshoot of her blog of the same name. Her first batch of fermented food was yogurt. Now she visits her local farmers’ market every Saturday before spending Sunday prepping foods for the rest of the week. “Traditional foods like fermented vegetables, yogurt or kombucha don’t take long to prepare; they take time to culture, but it’s so rewarding,” she says.

How Much Is Enough?

Fermented foods offer a variety of positive effects on health. “If you’re consuming a diet rich in fermented foods, you’re essentially bathing your GI tract in healthy, food-related organisms,” says food research scientist Robert Hutkins, Ph.D., a professor at the University of Nebraska-Lincoln. Fermented foods with live probiotics can also improve brain function, according to a study in the journal Gastroenterology.

Fermented foods are meant to be eaten as condiments, not consumed in large quantities. Overdoing such intake might cause bloating, cramping and other digestion problems. Dr. Leonard Smith, a gastrointestinal and vascular surgeon and medical advisor for the University of Miami Department of Integrative Medicine, recommends “a half-cup of cultured vegetables or two ounces of your favorite probiotic liquid per day to start.” He says it’s possible to eventually work up to having a serving of cultured vegetables and probiotic liquids at every meal, or possibly as a between-meal snack.

Christopher Shockey adds, “We don’t see these foods as a ‘medicine’ to be eaten daily because you have to force yourself; instead, we see it as a fun, delicious, easy, healthful addition to mealtime.”