PM Getting to the Root of Plant Medicine 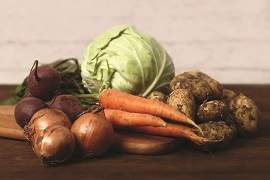 Getting to the Root of Plant Medicine

It's been eleven months since Natural Awakenings debuted the Plant Medicine section. In just that short amount of time, plant medicine has become more visible and certainly more popular. Each day brings new discoveries of how plants are becoming the new pharmaceuticals. Natural Awakenings remains focused on educating its readers about alternatives to pills, tablets or capsules and helping them notice the medicine cabinet that is Mother Nature.
Seeing that plant medicine has to begin with a plant, it’s necessary to examine the structure of the numerous different kinds of vegetation that grows on the planet. The one element that they all have in common is having a type of root system which anchors the plant to the environment where it’s growing. The roots of the plant are the life strings that keep the plant thriving. Roots are responsible for getting water and nutrients to every other area of the plant.
There are two main types of root systems. Monocots, also known as the adventitious root system, are fibrous. They look like veins that span out from side to side and are most often near the surface of the ground like grass and those pesky weeds. The second kind of root system are dicots, which consist of a taproot. The taproot grows downward into the soil and will form smaller roots from it.
A simple way to remember the difference between the two systems is monocots are planted with a single seed, and the edible outcome grows above ground. Popular monocots include bananas, pineapple and plantains. High in potassium, these fruits help boost the immune system, aid in respiratory health, create strong bone structure, can help cure coughs, offer relief from stroke and high blood pressure and help regulate blood sugar. This is certainly a tasty bite of information regarding natural health solutions.
Taproots grow underground and become swollen. They fill up with minerals, water and nutrients. They’re a storage unit, in a way, where the plant can pull what it needs from the root. Carrots, radishes, turnips and beets are all examples of a taproot. These vegetables, and their colors, are packed full of antioxidants. Remember, colorful fruits and vegetables are some of the most beneficial foods for the body.
So, what about the potato? It would seem that potatoes are taproots because of their bulging size and growing underground. But potatoes are not a taproot; they are tubers. Tubers grow at the base of the roots, and store nutrients in the form of starch to support new growth for the plant. Examples of tubers include potatoes, Jerusalem artichokes, jicama and yams. Considered an underground plant organ, potatoes, according to the U.S. Department of Agriculture, rank fourth as a major food staple worldwide.
The potato belongs to the nightshade family and was believed to be poisonous, and even though it was grown by the ancient Incas thousands of years ago, this tuber was not accepted as being edible in Europe until the 1500s. It took so long to become accepted because, in fact, all parts of the potato plant, except for the edible tuber, are poisonous because it contains the substance solanine.
Potatoes were introduced to the U.S. in the mid-1600s, and “French fried potatoes” were made popular when Thomas Jefferson, in the early 1800s, served them at the White House during his presidency.
Trailing Russia, Ukraine, China and India, the U.S. is fifth in the world for growing potatoes. Per capita, however, Americans eat nearly twice the world average. Disappointingly, more than half of that is in the form of fast foods, scalloped potatoes and mashed potatoes with lots of butter. Perhaps this is why the potato was listed as a taboo food during the low-carb diet craze in the 2000s. The potato is rising in popularity again because of the medicinal benefits it offers.
One medium baked potato has only 161 calories, plus 4 grams of filling fiber. Cooked, refrigerated potatoes are loaded with resistant starch, which is a fibrous substance that could help with weight loss. USDA researchers have discovered over 60 different vitamins and phytochemicals, many of which improve heart health, protect against lung and prostate cancers and boost immunity. As with any diet, it’s all about portion control and what people are adding to the food like butter, sour cream and cheese. Try topping a baked potato with some chili or sautéed vegetables.
If roots, and tubers, in their many different forms, are the channels where nutrients are transported to other areas of the plant, it makes sense that they would be packed full of a menu that is rich with nutrients, minerals and vitamins. There are different ways to tap into the inventory of goodness existing within roots. There are a number of teas that are comprised of roots, which are used for their medicinal value. Some topicals are infused with the essence of particular roots. There is probably no better way to absorb the benefits of the powerhouse which is roots than eating them.

Jeffrey Green, MA, is an educator, having taught in elementary, middle and high schools and at the University of Arizona. Currently, he is a freelance writer, reiki practitioner and a light and energy worker. On staff for Natural Awakenings, Green enjoys educating the public on all things positive, natural and metaphysical.