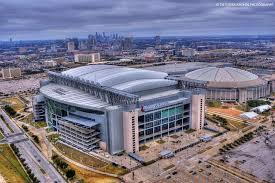 What a winning team … sustainability and football! NRG Stadium is home to the NFL’s Houston Texans and the host site of this year’s biggest game (Super Bowl 51), on Sunday, February 5. This beautiful, and relatively new, state-of-the-art sports and entertainment venue was constructed with sustainability and environmental impact in mind. Built by NRG, the leading integrated power company in the U.S., the stadium is one of four facilities nestled within the 350-acre NRG Park complex. The park offers numerous sustainable eco-friendly features, including nearly 600 solar panels, four solar panel canopies and an electric vehicle parking area featuring NRG EVgo charging stations. NRG Stadium also has integrated LED field and stadium lighting, making the facility more energy efficient. In fact, it is one of the first professional football venues to install LED field lighting.

The NRG company has received several awards for its industry leadership and nationwide “econrg” initiatives, which are fashioned and designed to meet the challenges of climate change, clean air and the protection of natural resources.